It has in effect released a communique to the general populace on the appointment of the New Vice-Chancellor and the new Registrar. The communique dated 17th June, 2020 reads as follows:

Check This Out:   JUST IN: $719,250 contract signed to support Student Teachers in Virtual Learning

“It is announced for the information of the University community and the general public that at its Special meeting held on 17th June 2020, the University of Cape Coast Council took the following decisions:

Council appointed Professor Nyarko Boampon, currently Provost of the College of Health and Allied Sciences, as the new Vice-Chancellor of the University of Cape Coast for an initial 4-year term of office with effect from 1st August, 2020.

Professor Johnson Nyarko Boampong will take over from the incumbent Vice-Chancellor, Professor Joseph Ghartery Ampiah, whose term of office ends on 31st July, 2020.

Check This Out: JUST IN: Put Congregation Ceremonies of 2019 Trained Teachers on hold – UCC to Principals

Mr. Jeff Teye Emmanuel Onyame will take over from the incumbent Registrar, Mr. John Kofi Nyan, when his term of office ends on 31st July, 2020.”

The above was signed by John Kofi Nyan, The Registrar and Secretary of Council.

A picture of the communique has been posted below. 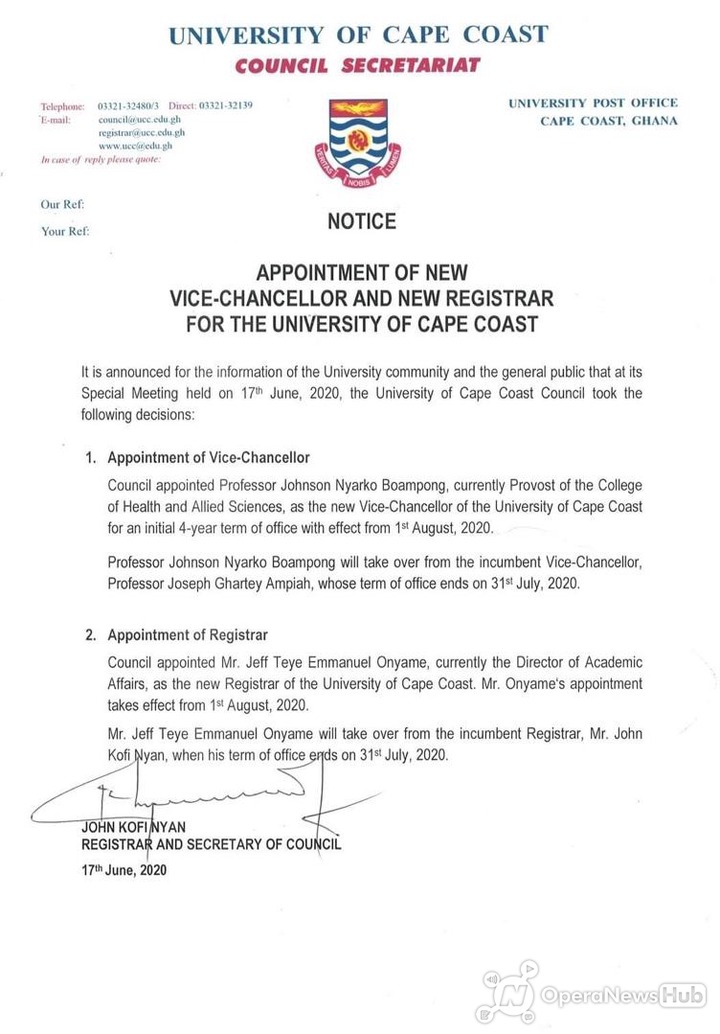 Check This Out: JUST IN: JHS 3 Teachers to be excluded from Temporary EC New Voter Registration job

NTC opens Advanced Training on Digital Literacy for all Teachers in...